Tithing and the Secular Community

A while back I had the opportunity to meet and work with Dale McGowan. Dale had this conundrum: why is there a perception that being a secular humanist means that you are less charitable than those who regularly practice a religion? His conclusion was that it wasn’t about whether one person is more charitable than the other, but rather a question of whether each individual had the opportunity to easily give in the first place. Churches benefit from the practice of tithing by asking the entire congregation to donate what they can to the collection plate each week. What does the secular community have? 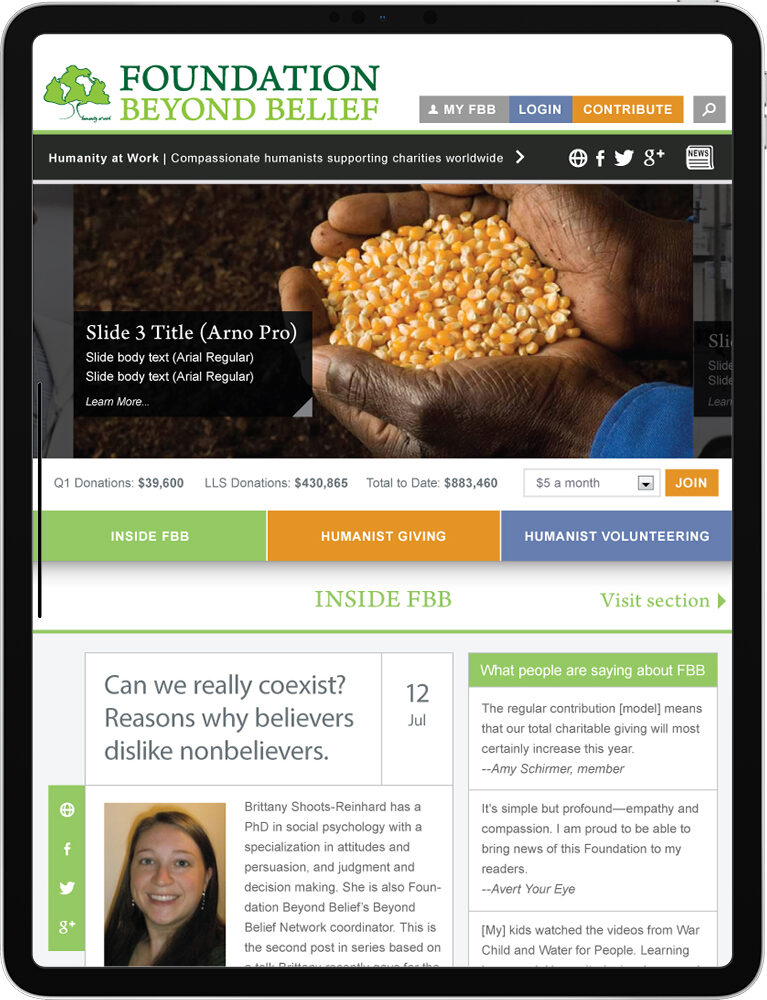 The answer in 2009 was “not much”. A church as a gathering place solves for a key element of tithing: community. Moving a community to donate is much easier than moving an individual. This being the case, secular humanists needed a community that was easily accessible and ready to give.

Foundation Beyond Belief was born out of this necessity: to solve for a lack of tithing in secular-based charitable giving by building a way for donors to send in an amount each month, the total of which was given out on a quarterly basis to a slate of vetted, non-proselytizing charities representing various categories like “poverty and health”, “animal rights”, and “human rights”. Charities receiving donations were swapped out per quarter with a preference given for smaller organizations where a sizeable donation could add the most value, thus spreading the wealth.

PayPal Recurring Payments
A year before FBB was born, PayPal’s parent company eBay acquired Bill Me Later, the leading competitor of PayPal. The purchase of Bill Me Later included more than its extensive network of clients (Amazon, US Airways, etc.). It also made it possible for PayPal to introduce a new experience: recurring payments. Even in its infancy, recurring payments suddenly opened the door to a solution for tithing. Using this model, users could now effectively donate, capitalizing on a “set it and forget it” mentality.

The Obama Donation Model
A key milestone in charitable giving was set in place during Obama’s first run for the office of the President. Simply put, his campaign made the conscious choice to move from a donation model whereby a few donors put in lots of cash to one where lots of donors give a very small amount. For the cost of one cup of coffee a month, you can make a difference was the idea being sold. And while the approach had been done before, it had never worked as successfully as it did for his campaign.

This model worked with great success, allowing us to successfully collect and disperse $1MM in charitable donations in July of 2013, less than four years after opening our doors (https://foundationbeyondbelief.org/the-first-million/) and $2MM mark two years later in 2015. FBB continues to successfully to this day, helping secular humanists find a home for their charitable giving.

Extending Functionality to Disaster Relief
A major benefit of creating a community based on charitable giving where donations are made as easy as possible to facilitate is that that same community can then be used to mobilize as a financial vehicle for help during times of crisis. The atrocities in Syria or the severe disaster during Typhoon Haiyan, along with a growing number of other disasters, often times require quick financial aid to sustain the work force that is on the ground helping survivors.

FBB’s donation collections solution as both a collection plate and a disaster relief fund drive allowed the foundation to have a quick and influential impact on those doing amazing charitable work in general as well as those needing aid during times of crisis. My work and time with Foundation Beyond Belief as it’s Creative Director remains some of my proudest professional moments.

Click below to filter other FBB projects (posts) by type of work:

See all posts on Foundation Beyond Belief